Oklahoma State University professor Dr. Miriam McGaugh is an expert in analyzing large amounts of data and recognizing patterns within it. While an epidemiologist for the Oklahoma State Department of Health, she used health care data to create community public health initiatives. Now the assistant professor of professional practice in business analytics in the Spears School of Business is taking on the tragedy of human trafficking in the United States.

For the last five years, McGaugh has explored ways to use data pulled from the internet to trace traffickers of victims forced into prostitution. Her research, conducted with colleagues from Louisiana State University and the University of Alabama, has developed ways to identify patterns in the use of phone numbers and images in online classified ads for sexual services that may indicate human trafficking. 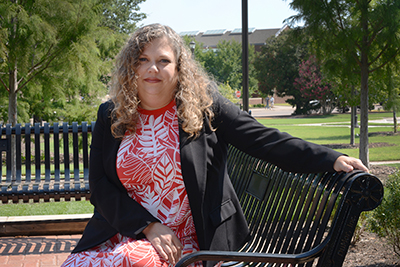 In the U.S., human trafficking is often believed to be an international problem that occasionally makes headlines with the discovery of domestic workers or manual laborers in other countries forced to work against their will. But the global trade in humans also harms millions of people coerced into sex work and is a major issue in the U.S., where a flourishing trade exists in people, including minors, forced to work as prostitutes.

According to the U.S. Department of Justice, law enforcement agencies identified nearly 4,000 confirmed victims of sex and labor trafficking in the U.S., 76 percent of whom were U.S. citizens and 42 percent under the age of 18, during human trafficking investigations from FY 2017 to FY 2018. An estimated 4.8 million people worldwide were forced to work in the sex trade in 2016, according to the United Nations.

"Everywhere we go and almost everything we do leaves digital footprints, especially on the internet."

In 2016, McGaugh joined a research project started at LSU to test a theory that contact phone numbers in online ads for adult services could provide clues about the people placing the ads. McGaugh, LSU’s Dr. James Van Scotter and Alabama’s Dr. Denise McManus used “web-scraping” software to capture text from nearly 700,000 classified ads on the website Backpage. com. The site was one of the largest sources for sex trade ads in the country until 2018 when the FBI shut it down.

Data from the ads, including phone numbers and categories such as escort services, adult entertainment, massage parlors and recruiting, were added to a huge database for analysis.

The researchers theorize contact numbers in ads provide clues to whether the ad is for legal adult businesses like strip clubs or illegal activity like prostitution. Traffickers often hide their ads from police internet searches using code words, slang, misspellings and abbreviations to foil the use of search terms. Though sex ads are easy enough to find on the internet, investigating their sources is difficult.

McGaugh’s research has shown that the lifespan and movement of phone numbers across ads can indicate the solicitation of customers for prostitution. A number tied to illegal activity is rarely used for more than a month or two before what is probably a “burner” phone is tossed. And phone numbers that appear in multiple ads associated with multiple escorts and in different regions of the country suggest a trafficking network.

The research team’s initial work in 2016 to collect online ad data was limited to 28 cities in Louisiana and the southeastern United States. In 2017, the study was expanded when data was pulled from 3 million Backpage.com ads covering 570 locations in 44 states and the District of Columbia. Phone number lifespan and category data were available for 7,275 numbers, 90 percent of which were for escorts.

Along with phone numbers, McGaugh and her colleagues also focus on photos and images in ads such as sexually suggestive emojis and emoticons, which can identify traffickers’ behavioral characteristics.

In 2019, McGaugh created a future tool for law enforcement when she worked with OSU student computer programmers to develop a mobile app called Break the Chain. While it’s still under development, the app will allow investigators to search through the database for phone numbers and geographic location to narrow the scope of investigations.

“This is a long-term project and will probably take years to reach its desired end goal of having a database to help law enforcement and intervention groups identify traffickers and their victims,” McGaugh said.

BusinessDiscover@SpearsNews TopicsSchool of Marketing and International BusinessSpears ResearchSpears School of Business
Back To Top
Back To Top
SVG directory not found.
©