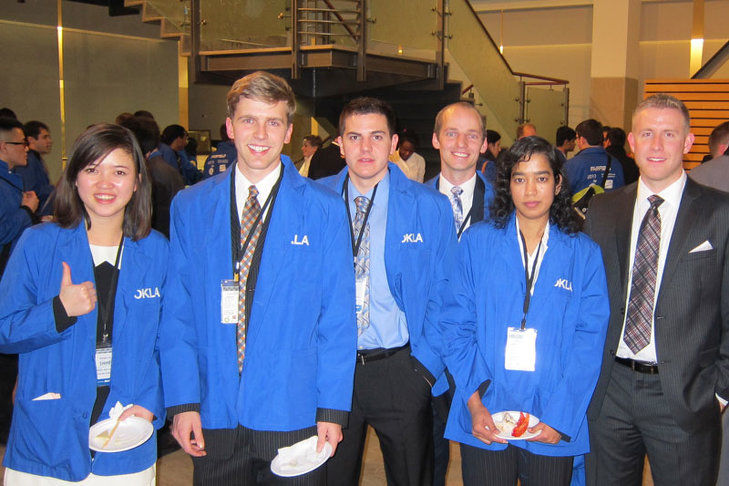 Six graduate students of the Spears School of Business in the Master’s of Science Quantitative Financial Economics program competed in the Rotman International Trading Competition in Toronto, Canada, in February. The group placed 19th out of 48 schools around the world andsixth among other universities in the United States.

Some of the schools competing were Texas A&M, Duke and MIT. Also, various universities from outside of the country including Thailand, Italy and Ireland.

“We prepared about a month or two in advance with the Rotman Interactive Trader software,” Berry said in an interview with the Daily O’Collegian newspaper. “The cases involved were options, commodities, mergers and acquisitions, sales and trades, and quantitative outcry. There was also an algorithmic trading case, and we made it to the finals in that, which is the best we’ve ever done.”

Judges ranked the cases and schools on profitability and how well they did.

According to the Daily O’Collegian, Krizek said because the team received case studies in advance to the competition it was able to practice in the Spears School’s Watson Trading Floor.

“We had about two months to prepare,” Krizek said to the Daily O’Collegian. “We could build our models to practice with on Microsoft Excel and we had practice sessions to help come up with our strategies to see how well they worked in advance.”

Tim Krehbiel, MSQFE director in the finance department at OSU, traveled with the team to Canada and served as the sponsor.

“I am especially proud of this year’s team,” said Krehbiel. “The time allowed to prepare strategies was very limited. The team members displayed a level of commitment and determination that is reflected in their superior performance.”

The last day of the competition allowed students to attend an award ceremony in the CN Tower. This allowed the team to mingle with the other universities and gain valuable networking aspects in career building for the future.

To learn more about the MSQFE program or the Rotman International Trading Competition, please contact Tim Krehbiel at 405-744-8660 or tim.krehbiel@okstate.edu

BusinessDepartment of FinanceSpears School of BusinessWatson Graduate School
Back To Top
Back To Top
SVG directory not found.
©