Marlin “Ike” Glass, Jr. is a patriot, entrepreneur and successful businessman. He learned a strong work ethic from his father while participating in the family-owned trucking business as a young man. Glass is now Chief Executive Officer of Glass Operating Group and has turned it into a large enterprise that operates throughout the Midwest. 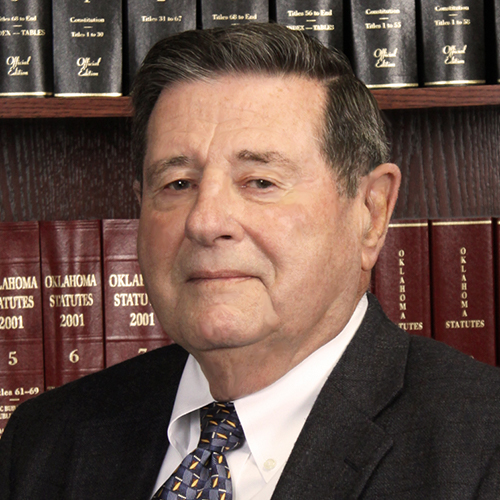 Immediately after high school, the Newkirk, Oklahoma, native joined the U.S. Navy, serving in the Korean conflict. After four years of service, Glass returned to Oklahoma to attend Oklahoma State University, where he met and married Marybeth Burnsteter.

In 1952, Glass graduated from OSU’s Division of Commerce with a bachelor’s degree in management.

Glass is most highly thought of for his efforts to make higher education and post-secondary education available to all children and citizens of our state. He has financially supported multiple scholarship programs and given encouragement and financial assistance to many your people, enabling them to purse a higher educations.

Gov. Frank Keating appointed Glass to the Oklahoma State Regents for Higher Education for a nine-year term in 1997. In 2007, he was reappointed to the position by Gov. Brad Henry.

Currently, Glass also serves on the boards of the Oklahoma Heritage Association, the Marland Children’s Home and RCB Bank and Trust. He is a member of the American Legion, Navy League, Disabled American Veterans and Veterans of Foreign Wars.

“This (Spears School Tributes: 100 For 100) recognition is very humbling,” Glass said. “What an honor to be a part of such an outstanding group of OSU Business School alumnus.”

Glass and his wife, Marybeth, reside in Newkirk. Their children:  Rob Glass, who is assistant athletic director for strength and conditioning in OSU athletics, and Jennifer Johnson, who resides in Washington, D.C., are both OSU graduates.