Imagine being able to say, “I hitch-hiked through South Africa and worked on an Angora goat ranch to raise enough money to buy a plane ticket back to Oklahoma.”

Not many, if any Spears School graduates can say they have been in similar situation, but that is exactly what happened to Rex E. Horning. What are more interesting than his story are his character, and his passion to serve. 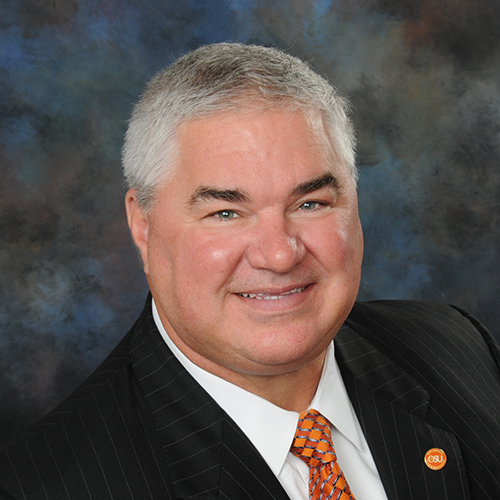 Horning is a native of Wakita, Oklahoma, and the second son of Edward and Monta. His older brother Mark, who earned a bachelor’s degree in management from the OSU’s college of business, was the first Horning to go to college, opening the door for Rex to follow suit.

“Coming from a small town, then being exposed to so many new opportunities at OSU I just wanted to absorb everything that I could,” Horning said.

As an underclassman, Horning’s involvement on campus primarily included activities around dorm and university life and student government. He joined the Young Republican’s club, the U.S. Marine PLC program and was heavily involved in intramural sports, particularly playing for the Social Zeros, who he says was dominating OSU intramural football during that time. Horning is rumored be one of the infamous Washington Street bull riders during the streaker days on OSU’s campus in the '70s.

Horning earned a bachelor’s degree in Business Administration from the College of Business in 1974.

If Horning’s success as an outgoing and active undergraduate didn’t prove his courageous spirit, his last act as an OSU student probably did.

In 1974, along with his fellow graduates, Horning had the privilege of having then-President Richard Nixon speak at the OSU’s commencement ceremony.

Just as President Nixon concluded his address to the audience of graduates, their family members, and OSU dignitaries, Horning spontaneously ran up on stage and handed Nixon the tassel from his graduation cap. Luckily, he received a warm welcome from the President, who also autographed Horning’s commencement program.

That was Nixon’s last public appearance before Watergate. Horning recalls exactly where he was when he heard the news that Nixon had resigned as President of the United States. It was only months after graduation in August of 1974, Horning was in Mebelapudi, Botswana, Africa helping a group of villagers build a corral for their donkeys.

Immediately after graduation Horning joined the Peace Corps, where he was stationed in rural Botswana, Africa. Horning worked and traveled throughout Botswana and southern Africa during a turbulent time of social unrest in Angola and Zimbabwe and when South Africa’s apartheid policy was still the law.

While traveling after his Peace Corp projects had ended his money was stolen in Cape Town, South Africa. With no money, he hitch-hiked throughout southern Africa and was picked up by an Angora goat rancher, who employed Horning until he could earn enough money for a plane ticket back home.

“My time at OSU gave me so much confidence to pursue things in life that I otherwise probably not have done. Whether it was the Marines, Peace Corps or career choices, I have always looked for the best opportunities to be of service. My OSU education and experiences gave me the confidence to consider options my entire life.”

After the Peace Corps, his brother Mark helped him get an entry-level job at Eastman National Bank in Newkirk, Oklahoma, where he met his future wife Charlotte, who worked at the bank. She helped train Rex in his new position and the two married in 1976.

Nearly his entire 38 year professional career has been in banking.

“My mission as a banker has always been to give back the community we live. Giving back has been an important part of my career and personal life,” Horning said.

In 2004 Horning was recognized as Stillwater Citizen of the Year. He received the Spears School Orange Star Award 2010.

In 2012, Rex and Charlotte endowed the Horning Bootstraps Scholarship. “The scholarship is for OSU business students who have a demonstrated determination and a real desire to attend OSU,” Horning said.

“I can’t overstate OSU’s impact on me. It has meant everything,” said Horning. “Without OSU, the Spears School, the professors, and the alums, I would have never dreamed of achieving the fulfillment of the professional career I have had.

“When I was notified of being one of the 100 For 100, I was overwhelmed. Knowing how many people that have come through the school that undoubtedly are more deserving than me; I could not be more proud,” he said.

His wife Charlotte, who earned a bachelor’s degree from OSU, has had a successful career in the field of human resources.