Bob Sandmeyer was raised in Kansas but instead of growing up rooting for coach Phog Allen’s University of Kansas basketball team, he was a fan of Henry Iba’s Oklahoma A&M Aggies. Bob Kurland was his hero. 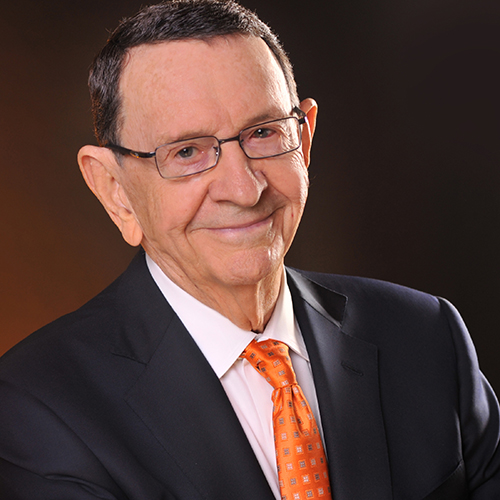 Sandmeyer earned the master’s degree in economics from Oklahoma State in 1958 and a few years later became one of the first students in the business school’s new PhD program in economics. After completing the required course work and passing the preliminary examinations, Sandmeyer joined the economics faculty at Arizona State University. In 1962, after earning his doctoral degree, he accepted an offer to return to Stillwater as a visiting assistant professor of economics.

Samndmeyer was appointed dean of the then College of Business Administration in August 1977 and served until September 1994. His 17-year tenure as dean is second only to Raymond D. Thomas’ 28 years of service as dean.

In the late ’70s and early ’80s, the United States faced increased competition from Japan to produce high quality goods at a competitive price. Although Japan had a competitive advantage with respect to labor costs this alone did not explain the fact that the quality of goods produced in Japan exceeded like products produced in the U.S. It became clear that the manufacturing process in the U.S. had to change by incorporating modern techniques. Likewise, business school curriculum had to change to include issues related to doing business in a global environment.

To illustrate the impact of changing technology on teaching and learning Sandmeyer said that when he became dean, the major capital expenditure for the college was the purchase of typewriters. With the advent of desktop computers the university reluctantly moved away from centralized computing to distributive computing. The typewriting labs were replaced by computer labs, which in turn were replaced by laptop computers.

Under Sandmeyer’s leadership, new and improved technology also allowed the business school to extend its programs, both credit and non-credit, off campus in a more efficient and cost effective way. The Spears School now uses the internet to deliver its nationally ranked distance learning programs to numerous sites.

Sandmeyer credits his forward-looking leadership team for what was accomplished during his tenure.

“As there was very little turnover in our leadership team during my 17-year tenure we could plan for the long run and take advantage of opportunities as they came along,” said Sandmeyer, who worked closely with business, foundations and government entities to increase endowments for faculty support and student scholarships. During Sandmeyer’s tenure the number of endowed chairs and professorships increased from zero to 13, and endowed funds for student scholarships also increased by a large amount.

Sandmeyer received many awards and recognition over the years, including his induction into the Spears School of Business Hall of Fame, the Oklahoma Higher Education Hall of Fame, the Fort Hays State University Alumni Achievement Award and the Fort Hays State University Alumni Distinguished Service Award. In recognition of his distinguished international service, Sandmeyer was appointed a Henry G. Bennett Fellow in the OSU School of International Studies.

Sandmeyer and his wife, Loretta, have been married 64 years. They have four grown children, four grandchildren and five great grandchildren. Their oldest great-grandchild, Jordan Scully, is currently a student at OSU.

“I am incredibly honored to recognized in the Spears School Tributes for the centennial celebration. I am humbled to know that I was chosen to represent the many outstanding graduates of the Spears School of Business,” he said.