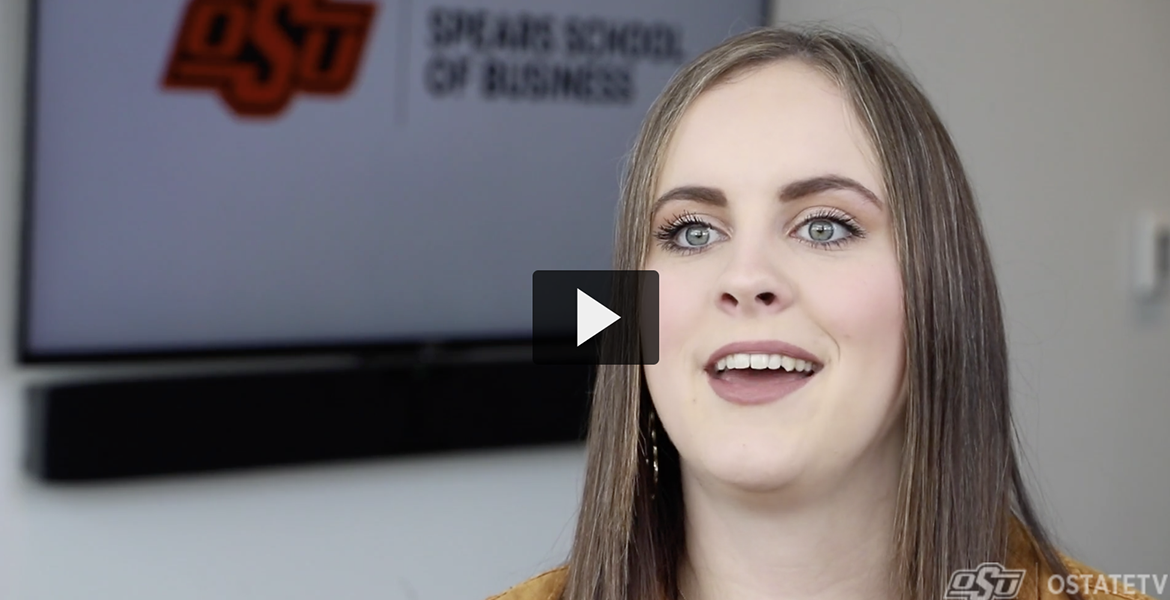 From tragedy comes healing and help for others

Life for everyone is challenging at times. Career, relationships, finances, and when you’re a college student add academic pressures to the list of things that can take an emotional toll. Young people are especially vulnerable but add a personal tragedy and the weight of it all can be overwhelming. Mikaela Stamper knows full well how facing such a loss while trying to put on a brave face can leave a person isolated and lost.

Now a senior in the Spears School of Business, Stamper faced one of the most devastating tragedies anyone could confront when her stepbrother took his own life in 2013. A high school freshman in Fairfield, Texas, between Dallas and Houston, Stamper felt overwhelmed with emotions she couldn’t easily process as a 14-year-old.

“In that moment I felt like I had let down one of the most important people in my life,” Stamper said. “I was angry, guilty and lonely and I didn’t talk to anyone because I didn’t know who to approach.”

Coming out of a dark period in her young life, Stamper found strength and the resolve she needed to not give up on her personal dreams including going to college. That period also led her to take on state legislatures, first in Texas and now in Oklahoma, to work to help pass legislation to train teachers to recognize the signs of school students who may be in trouble, like her big brother.

Stamper was especially close to her stepbrother Dustyn Blake Sandefer, 16, who always looked out for his little sister.

“Blake was the most loving big brother,” she said. “He was playful and incredibly smart, probably the smartest person I've ever met in my life, but I now realize that he was fighting a battle that he never told me about.”

Though it’s been seven years since Blake’s death, for Stamper returning to feeling normal again took years. Her emotional state even worsened when she moved to Stillwater to begin classes as a freshman at Oklahoma State University because her oldest brother went through a dark time. Now several hours from home, Stamper faced depression, isolation and anger as she tried to come to terms with “her new normal” as she describes her life after the trials and feelings she tried to suppress in order to be strong for others.

Feeling more and more isolated, Stamper nearly quit school after her freshman year at OSU, but her family convinced her to return to Stillwater, and over time, with therapy, she has become more comfortable talking about her emotions and accepting that feelings such as sadness are not a weakness, but a normal part of life.

Another outlet for Stamper has been her passion and involvement with passing the Jason Flatt Act in her home state of Texas and now, as an OSU student, working with Oklahoma state legislators to pass it here. The Jason Flatt Act is a teenage suicide awareness and prevention law named for a high school student who took his own life in 1997. The law, which has been passed in 20 states, requires teachers to go through training each year to recognize the signs of suicidal teens in school and how to intervene.

“Four out of five teens who attempt suicide give clear warning signs and usually they’re missed,” Stamper said. “I missed it.”

Stamper became aware of the Jason Flatt Act on the day her stepbrother died. Only a few weeks before, the son of Fairfield High School football coach Kevin Childers committed suicide and now Childers approached Stamper knowing that she needed help with her unimaginable grief.

“He came to me and said, ‘I’ve got something I want your help with,’” she said. “He said it’s something that will help us and help others and that’s how I found out about the Jason Flatt Act.”

The legislation was introduced in Texas and Stamper worked with Childers and many teachers to lobby the state House to pass the bill, which was signed into law in 2015. When Stamper decided to attend Oklahoma State, she knew the state had not passed the act and it became her goal to see it become Oklahoma law before she graduated. Stamper contacted state Rep. John Talley of Stillwater and asked for his help and together the two and Talley’s legislative aid are working to draft the bill’s language and introduce it to the Legislature.

Stamper is a senior this year with a double major in management and marketing and will graduate this May. She already has a job lined up in Tulsa after being accepted as a management trainee with Cintas. She knows a lot of work needs to be done to see the law passed, but Stamper says the effort and educating people about the need has energized her. Also, this year, Stamper joined an OSU mental health awareness campaign called “Let’s Talk About” in order to help her fellow students see that depression and other emotional disorders don’t have to be stigmatizing.

“One of the things that keeps me going every day is knowing that I have family and friends who support me and love me, no matter what season of life I'm going through,” she said. “Knowing that I found the strength and courage to share my story and my brother's story, and to help save someone else, makes me feel really good.”