Joe Stone may not know what to do when he wakes up Sunday, May 8.

For the first time in nearly two years, the Spears School of Business economics major won’t begin his day concerned with his latest homework assignment, when his next big project is due or if he’s studied enough for his next test.

At 19 years old (yes, that’s correct, 19!), Stone will be a college graduate when he rolls out of bed that morning. Since arriving at Oklahoma State University in August 2020, he has made it his mission to graduate in two years. Although he arrived on the Stillwater campus with 34 credits from taking advanced placement courses in high school, Stone had to take full class loads the last five semesters (Fall 2020 and 2021, Summer 2021, and Spring 2021 and 2022) to graduate in May.

Stone will walk across the Gallagher-Iba Arena stage during the Spears School of Business commencement ceremony May 7 having accomplished his goal, and even more impressive, with a 4.0 grade-point average and no student debt.

“Once I got to college, my sister and I were splitting the GI Bill from my dad, so each of us got two years,” Stone said, “And I was like, 'Well, if I can find a way to make it out of here in two years, I’m going to do it.' But it has been difficult.

“I was often the class clown growing up and as the class clown, you don’t want the teachers to think you’re smart. But I think that coming into college I just had a different mindset about everything. This is when it starts to get important to me. I think that was the big thing that pushed me to decide to graduate at 19. I don't think it was any ideas of grandeur that I had when I was younger.”

Stone took 19 hours every fall and spring semester at OSU, and enrolled in 10 hours the one summer semester he was on campus, all before reaching the age of 20.

Stone maintained straight-A’s while taking that full class load and holding down a job. He kept his job at a large electronic store warehouse in his hometown of Norman and would work between 8 to 15 hours each weekend.

Stone admits that he missed out on many college experiences by concentrating on his studies, but he believes graduating in two years is worth the sacrifices. 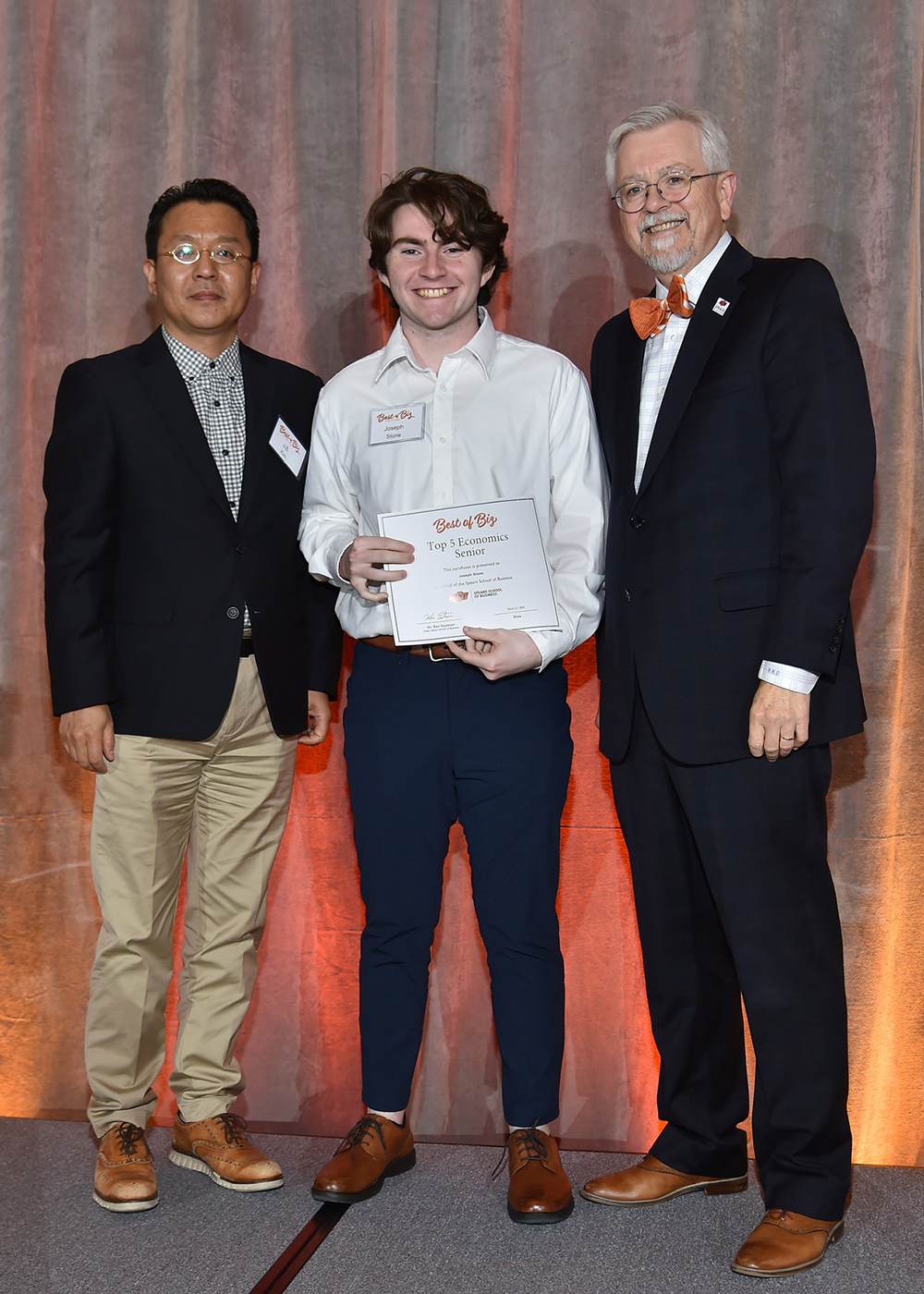 “There were a lot of times where I wanted to be able to do things with my girlfriend and my roommate, but I just didn’t have the time and I had to say no,” he said. “I definitely missed out on a lot of what people would call the college experience because of it.

“I didn’t go to any games, I didn’t party, I didn’t do anything. I sat and I studied mostly. I've told people multiple times throughout college that the hardest part of college for me has been maintaining my close relationships with people around me because I oftentimes didn't feel like I had time for them. But I also made time to have fun. The spring semester of last year, my roommate, Jacob, and I dropped everything and spontaneously went on a road trip for a week.”

Stone was recently recognized during the Spears Business Best in Biz awards ceremony as a Top 5 Senior in the Department of Economics. He was also honored in April by being one of nine students statewide to be awarded a $2,000 scholarship by the Economics Club of Oklahoma.

“The Best in Biz awards ceremony was the first time I’d ever been to something like that,” he said. “Even in high school, I never received any awards, so I thought it was kind of weird to get recognition for my achievements, because I’m not used to it. I’m used to just doing my own thing and just being happy that I’m doing it.”

The next challenge for Stone will be attending law school at the University of Oklahoma. He will begin this fall as a 20-year-old law school student (he turns 20 in June), and he has already bonded with some of his new classmates.

The recently accepted OU College of Law Class of 2025 was invited to a special event in Oklahoma City and Stone caught the attention of several future classmates.

“One of the first times my age came up was when this guy turns around and grabs three or four people and points at me and says, ‘Tell them your age.’ I was like, ‘Oh goodness,’” he said. “Another time some of the non-traditional students were talking about how old I was making them feel, and one made a comment, ‘This is Joseph, who just came out of kindergarten,’ and I thought that was really funny. It doesn’t bother me, and I think it’s funny.”

Stone is eager to begin law school, but realizes that it will be much different than his two years at OSU.

“I don’t know if it’ll be exactly the same as far as how busy I am, but when I’ve talked to the admissions people about my time at OSU they always say something like, ‘OK, well then law school shouldn’t be too much of a change of pace for you.’” Stone said.

The teenager said 150 students will enter OU College of Law this year, and they will be split into four sections, taking all their classes together over the next four years. Stone, like many his age, is still not sure which career path he will take when he graduates from law school.

“I think it would be cool to be an attorney and part of me thinks it would be really awesome to be a judge because that sounds like fun, but I also know it’s really hard to become a judge,” he said. “I think my biggest desire is I just want to do something that I feel challenged doing and that I go to work every day and just enjoy it.”

BusinessDepartment of EconomicsGraduationSpears School of Business
Back To Top
Back To Top
SVG directory not found.
©