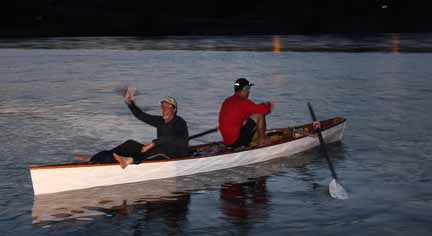 “Our trip was the fastest unsupported (brought their own food and water) journey ever recorded along this stretch of river and we’re the only team that ever made the voyage without once stepping ashore,” said Price, associate vice president for technology development at OSU. “Our time was the fastest recorded by anyone in the last five years and we missed breaking the overall human-powered record by an hour and 18 minutes. That record was set in 2008 by a six-person team.”

The 62-year-old Price and fellow rower Colin Angus, 42, posted the fourth fastest time ever recorded and the second fastest time in history for a team of two when they rowed from Whitehorse to Dawson City in Canada in 50 hours and 50 minutes, June 26-28. Angus, a veteran outdoorsman, was named the 2007 National Geographic Adventurer of the Year as the first person to circumnavigate the globe by human power.

The pair hit strong headwinds during a 33-mile lake crossing (Lake Laberge) that set them back an hour and one-half along the Yukon stretch that more than 700 teams have raced down since 2001.

“At one point, so much water was coming into the boat from waves that we could only just keep up with bailing the water out,” said Price. “In addition, water splashing over the bow soaked our sleeping bag and us, which, when coupled with the wind, made for a cold transit. Had conditions been calm on Lake Laberge, we would have comfortably achieved our goal of setting a human-powered speed record.”

The sleeping bag eventually dried out, so one team member could rest while the other rowed, trading positions every two hours. The pair maintained an overall average speed of 8.6 mph, reaching speeds of up to 13.5 mph along one stretch of river in the row boat that was custom-made by Angus.

“When we finally arrived in Dawson City at 4:53 a.m. on June 28, we were feeling a bit tired but in good physical shape. The rowboat performed flawlessly—tracking well through the turbulent waters and providing ample stability,” writes Price in a blog that offers an overview of the journey.

“No repairs or adjustments were required for the duration of our quest,” said Price. “While we didn’t break the overall human-powered record, we were thrilled to have set the records mentioned, as well as to have demonstrated the speed and power of the two-person rowboat design.”

The rowers are thanking their wives, who helped make the adventure possible, as well as a trio of witnesses, who recorded the team’s departure and arrival times in the early morning hours.