Two things struck Tim O’Connell about the Great Horned Owl making the Oklahoma State University campus her home – the location of her nest on the ledge of a building, and the date.

O’Connell, associate professor in the Department of Natural Resource Ecology and Management, was one of many who took interest when the beautiful bird roosted on the ledge of OSU’s Engineering North building earlier this spring. O’Connell first heard about the owl in April, which was odd “because Great Horned Owls are usually on the nest in January, not April.”

Despite the warm spring winds that permeated the plains of Oklahoma, the owl sightings continued through May. Once other nest-dwellers were discovered, it was easy to see why the owl remained perched atop the improbable shelter for so long.

“The female was incubating eggs for a few weeks, and by mid-May it was clear that she had two owlets in the nest,” O’Connell said. “Over the next few weeks, the owlets grew and by May 24, the female was no longer on the nest. Instead, she assumed a perch on Edmon Low Library where she could keep an eye on her babies from afar.”

From this perch during the second week in June, the mother watched her owlets leave the nest for the first time. Based on O’Connell’s observations, the owlets fledged at six weeks old. He contacted the Center for Veterinary Health Sciences when he noticed the pair was missing, and learned one owlet was in the care of the center. The first owlet hasn’t been spotted since June 15, but is likely still with the mother. The second owlet was transferred to a wildlife rehabilitation facility on June 20.

Lindsey Woods, avian, exotic and zoological medicine intern in the OSU Teaching Hospital, said the owlet was transferred to The WildCare Foundation in Noble, Oklahoma because someone had mistaken the fledging bird to be injured and brought it to the hospital. She explained that many birds leave the nest before they are capable of flight, which causes people to believe the animals are in danger or hurt.

“The owlet had just had a good meal,” Woods said. “He wasn’t dehydrated and was at a good weight. The parents appeared to be caring for it.”

Unfortunately, the owlet was not able to return to its mother after its arrival to the hospital. Despite the good intentions of the person who brought in the bird, it was essentially taken from its family after being disturbed in its natural setting.

“That was unfortunate in that the owl will now be separated from its family, but at least it will be well cared for and trained in how to catch food on its own before it will be released,” O’Connell said.

For now, OSU’s new friend remains perched near the Edmon Low Library. The Great Horned Owl has even earned the nickname “Birds Hargis” on social media. Take a look below and be sure to join the conversation. 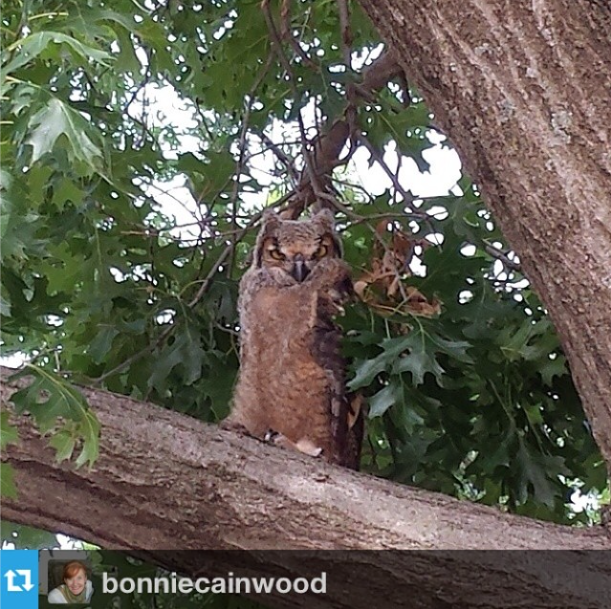