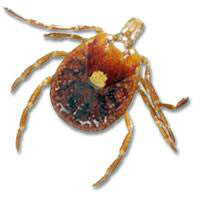 Cats become infected after being bitten by an infected Amblyomma americanum tick (also known as the Lone Star tick because of the single white mark visible on it). Up to 15 days after being bit, the cat will become ill with symptoms of lethargy and decreased appetite. Infected cats will have a high fever (104-106°F) and may show signs of anemia (pale gums) and jaundice (yellow discoloration to the skin due to a build-up of bilirubin in the blood).

Cytauxzoonosis results in protozoal sepsis, characterized by a profound systemic inflammatory response. The result of this systemic inflammation is a high body temperature, increased respiratory rate, clotting abnormalities and damage to such organ systems as the liver and kidneys. The infection is often complicated by the formation of blood clots, which may result in reduced blood flow to vital organs. Without treatment, cytauxzoonosis can kill within a few days of symptoms appearing.

Ordinary antibiotics for common infections are not effective against Cytauxzoon felis, a protozoal organism. Standard therapy for cytauxzoonosis is a combination of an antimalarial drug (atovaquone) and antimicrobial medication (azithromycin) in addition to supportive care to provide hydration and electrolyte balance, oxygen supplementation and nutritional support. A 2013 study found that the combination of atovaquone and azithromycin resulted in a 60 percent survival rate. Cats included in this study were from various states across the South and southeastern United States, including Oklahoma. But OSU clinicians have observed that cats infected here with cytauxzoonosis have a lower survival rate, possibly due to a different strain that may be more severe or resistant to standard therapy. Current research is studying the potential differences between infections in different geographical regions.

Cytauxzoonosis is a seasonal infection, with most cats becoming infected between March and September. Usually there are two waves, with the first starting in March/April and ending in late June and the second wave between August and September. There may be annual variations in peak months based on rainfall and temperatures, as these variables may impact tick transmission.

Because cytauxzoonosis is a tick-transmitted disease, the best prevention is tick prevention. All cats in Oklahoma (indoor and outdoor) should receive tick prevention year-round, especially from March through September. Combining multiple tick prevention products (when safe) may be recommended in cats with outdoor exposure, especially in regions near wooded areas or forest, as the combination of bobcats (the natural host and carrier) and ticks are likely in these areas. Discuss tick prevention options with your veterinarian to ensure the products you are using are safe for your cat.

If you believe your cat is exhibiting signs that could be cytauxzoonosis, have your cat evaluated by a veterinarian immediately, as rapid intervention and treatment may improve the chance of survival. The Oklahoma State University Veterinary Medical Hospital is open 24 hours a day, and our veterinarians are trained to treat this life-threatening infection.