When Chad Weiberg walked into his introduction to management class nearly 30 years ago, the 20-year-old was counting on learning the principles of effective team building, motivating employees and conflict resolution. What he wasn’t expecting to receive was a lesson that has stayed with him to this day.

In that classroom of nearly 300 students on Oklahoma State University’s Stillwater campus, Weiberg learned something that he still applies every day of his life — that making a connection with people matters. The professor, Dr. Raj Basu, made a point of learning every student’s name in the huge room by the second week of the class.

“He was telling each of us that we matter, and we weren’t just one of 300 students in this class,” Weiberg said. “He was teaching the subject, but he was also going to make a personal connection. That always resonated with me.”

That’s why Weiberg enrolled in another class taught by Basu — and did so a third time before graduating with a bachelor’s degree in business administration in 1994. Then, he took two more classes from Basu while working on his MBA.

Weiberg has spent his professional career making personal connections in a variety of roles working for Big 12 Conference athletic departments, but he’s now preparing for the biggest role of his life. The 49-year-old will become OSU’s athletics director on July 1, replacing Mike Holder, who will continue to support the athletic department as a special adviser focusing on fundraising and facility development. 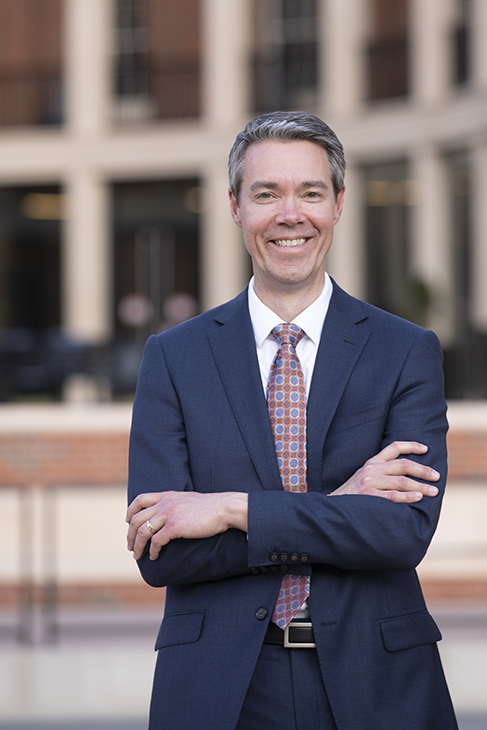 Weiberg arrived at the OSU College of Business Administration as a sophomore in 1991, planning to major in international business and eventually move overseas. But after being appointed to the Student Athletic Advisory Council and getting to know members of the athletics staff, his career direction changed. Coming from a background in which his father, Mick Weiberg, was a college and high school basketball coach and his uncle, Kevin Weiberg, served as Big 12 Conference commissioner from 1998-2007, his new career choice in college athletics administration made sense. Thus, his career path led him to Manhattan, Kansas, and Lubbock, Texas, but not Moscow or London.

An internship as an undergraduate led Weiberg to a full-time job with OSU Athletics followed by four years with the OSU Alumni Association and a year with the OSU Foundation as director of development for the business college (now known as the Spears School of Business).

“It was my first opportunity to do what is referred to as major gift fundraising for the College of Business, so it was in a lot of ways like raising money for my college,” he said.

Weiberg was working for the OSU Alumni Association when he suffered an unimaginable loss. His younger brother, Jared, a student manager for the Cowboys’ basketball team, was one of 10 people killed when a team plane crashed in Colorado on Jan. 27, 2001.

While at the OSU Alumni Association he met his wife-to-be, Jodi, who was working at the Kansas State Alumni Association. A friendship soon became a long-distance dating relationship, and when the two became engaged they had to decide where to live. Weiberg was hired in 2004 to oversee corporate relations at the KSU Foundation and moved to Manhattan.

He had great success during his 10 years at Kansas State, eventually assuming the lead fundraising role for KSU Athletics. He was recognized as the National Fundraiser of the Year by the National Association of Athletic Development Directors in 2014. He then worked for two years at Texas Tech before returning to OSU in 2017 as deputy director of athletics. He believes leaving OSU was the right move, even though it forced him to consider the possibility of never returning to his alma mater.

“I had to convince myself that there would be value in going and learning at other places, and that’s a step that I had skipped (when I got the OSU job in my early 20s),” he said. “But I also remember thinking, ‘but will I ever make it back?’ I had to reconcile in my mind that for this to be a good thing. … I have to get comfortable with the fact that I might never get to come back. I knew the stars would have to align and so many things would have to happen timing-wise, and the chance of that happening were pretty slim.”

But the stars did align, and Weiberg returned to Stillwater in 2017 with Jodi and their two children, Ella and Grant, when he accepted OSU Athletics’ No. 2 position. He’s now focusing on taking over as athletic director and making sure OSU Athletics recovers from the financial hit it took last year because of the coronavirus pandemic. The full extent of the impact won’t be known until the Big 12 distributes revenues to conference schools, but Weiberg is already looking ahead.

“I feel good about our ability to move forward,” he said. “Coach Holder has done a great job of putting us in a position to be able to do that.”

Some of the principles he learned from his business professors will help OSU Athletics recover from 2020, but it’s about more than just making money, Weiberg said.

“I prefer to call it more of an enterprise, although it does have some business principles to some degree that you would apply but there are a lot of things that don’t apply,” he said. “Because it’s not all about making money. There are clearly a lot of things we do that don’t make money, so you have to approach it differently.

While Weiberg is looking forward to his new role leading OSU Athletics, he’ll prefer to do his work in the background and let the student-athletes and coaches be the focus. He’ll be happy with others being the faces of the university, like new President Dr. Kayse Shrum, men’s basketball coach Mike Boynton and football coach Mike Gundy.

“It shouldn’t be about me. It is about our institution, it is about our student-athletes, and it is about our coaches,” he said. “To me, those are the people who should be out front. I do think there is a role to play in communicating with the fan base so they know what is going on with the department. That is the role that the athletic director, from a CEO standpoint, should fulfill, but everything else should be about the coaches and student athletes.”

Weiberg is preparing to step into the role that he has dreamed about since being hired as a director of corporate sales in the POSSE office after earning his bachelor’s degree from the College of Business Administration. He struggled with leaving OSU for Kansas State in 2004, but he realizes it was the best move for his career and paved the way for his return.

“There are moments in your life that provide some opportunity for reflection. Well, when all this was happening, leading up to the announcement, it was certainly one for me,” he said. “What was going through my mind was, ‘what in the world happened that allowed me to get here?’ In that process of reflection, it becomes very clear, at least it did for me, that it was largely the people who helped me along the way.

“It certainly includes my time at the College of Business as an undergrad student, MBA student and working there as a part of the Foundation. All of those people certainly played a big part in giving me this opportunity.”

Engage@SpearsMagazineSpears School of Business
Back To Top
Back To Top
SVG directory not found.
©