Dr. Kelly Way has spent much of her adult life at Oklahoma State University. She earned her bachelor’s and master’s degrees and a doctorate from OSU. Part of her legacy at OSU is her son, Mark, who is preparing to start his own career after graduating from the same program where his mother earned three degrees.

Kelly Way earned all of her degrees in the School of Hotel and Restaurant Administration (HRAD), now a part of the Spears School of Business. Mark Way is earning his bachelor’s degree this spring from the school, now known as the School of Hospitality and Tourism Management (HTM). For nearly 20 years, mother and son walked many of the same hallways and sat in many of the same classrooms, though two decades apart.

Kelly started her college education at Northeastern State University in Tahlequah, Oklahoma, before transferring to OSU, where she earned a bachelor’s degree in hotel and restaurant administration in 1991. She worked for restaurants in Tulsa and Stillwater, including for Stan Clark Cos. at Mexico Joe’s, then decided to enroll in the HRAD master’s degree program to gain more opportunities for advancement.

While a master’s student, Kelly gave birth to Mark and that, along with her first taste of teaching classes at HRAD, like Introduction to Hospitality, convinced her that teaching rather than working directly in the hospitality industry would be best for her and her son.

“When Mark was born, I had what Stephen Covey calls a paradigm shift,” Kelly said. “It’s hard to be at a restaurant until 2:00 in the morning, come home, feed the baby, sleep a little and get back at it again. I wanted more time with my son — waking time.”

After completing her master’s degree, Kelly worked as an administrative assistant for HRAD and began the school’s doctorate program.

Having begun waiting tables in restaurants when she was 15, she said she couldn’t image a life that didn’t involve the hospitality industry.

“I love the hospitality business, and I’m completely unemployable in any other industry,” Kelly said. “At OSU, I also realized that I love training and education and by becoming a professor, I’m still involved in the industry — only now I teach the hospitality stars of tomorrow.”

After finishing her Ph.D. in 2006, Kelly went to the University of Arkansas in Fayetteville as an assistant professor of hospitality management. Though now a tenured associate professor there and assistant director of the School of Human Environmental Sciences, Kelly maintains strong ties to her alma mater and former professors at OSU. She said her closet is full of orange clothing for the Cowboys and crimson for the Razorbacks, and she easily slips from one outfit to another.

Mark was in second grade when his family moved to Arkansas. After graduating from Fayetteville High School, he decided to study engineering and considered the University of Arkansas, but he decided to become a Cowboy after an OSU visit. He enrolled in the OSU College of Engineering, Architecture and Technology’s Fire Protection and Safety Engineering Technology program because he felt a fire service career would be exciting.

“I found out the career mostly involves looking at building codes, which are thousands of pages long,” Mark said. “It’s like being a lawyer, and I couldn’t see myself doing that.”

He talked to his mom about his change of heart, and she sent him to talk to Dr. Bill Ryan, one of her former professors at the School of Hospitality and Tourism Management. Ryan and she have remained close and Ryan remembered Mark as the little boy he would see around OSU offices and classrooms with his mom. Mark remembered hanging out there, too, and it felt like he had come home. He transferred to HTM. 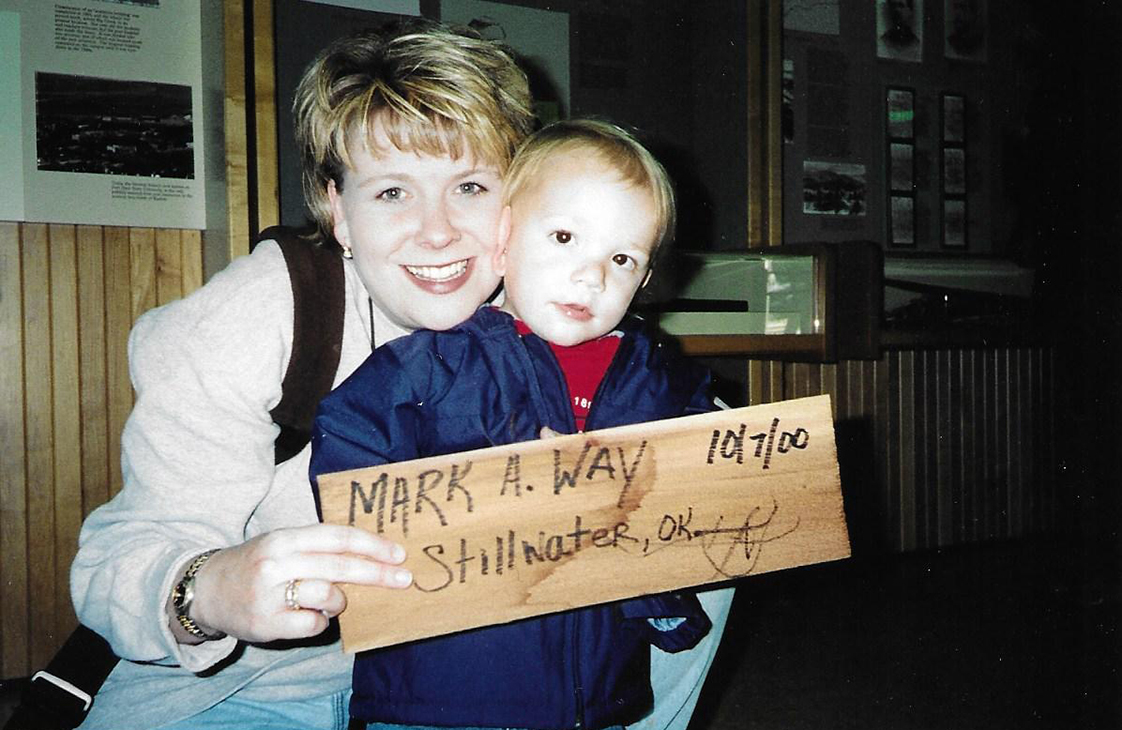 Mark held several jobs growing up in Fayetteville working for restaurants, an event planning company and a country club, so working for hospitality businesses was second nature to him, like it was to his mom. And earning a hospitality degree and starting a career in the industry made sense.

“With hospitality jobs, you’re not locked into anything. You can go into food and beverages, hotels, event planning, and that attracted me,” Mark said. “At OSU we also learn by working hands-on in all of those environments instead of, ‘Here’s a textbook. Go figure it out when you get there.’”

Alumni from university hospitality programs are a network of academic and industry professionals who often work closely together for years after graduating. For Kelly, HTM faculty in Stillwater were the inspiration for her pursuing a career as a professor. And now they were teaching her son. During her time at OSU, two professors, Ryan and Dr. Pat Moreo, were important influences on her and are still her mentors today.

“I saw the difference they were making in students’ lives,” Kelly said. “Their students would wait outside their offices sitting on the floor for hours just to ask their advice about something. I’m like, that’s what I want to do. That’s why I want to be like that.”

Mark graduated in May and he said that despite the COVID-19 pandemic, jobs in the hospitality industry are out there and he’s confident he’ll land a good position. He has decided that he doesn’t want to become a professor, at least not for now. But with two industry internships and time spent working, Mark already has years of experience under his belt and is ready to start his career.

What does Kelly hope her son has learned while a student at OSU? Basically, the same things she is teaching her own students.

“I hope Mark has developed a high emotional intelligence level and that he understands how to work with employees and co-workers,” Kelly said. “I hope he has learned empathy and the understanding that hospitality is about being flexible, not just with your customers, but with your employees and the people you work with.

“I’ve always said this to my students, and I say it to Mark: ‘This is a great industry, and you can thrive in it. You can have a phenomenal career.’”

Engage@SpearsMagazineSpears School of Business
Back To Top
Back To Top
SVG directory not found.
©