Cooking for the Crown

As the former chef for the British Royal Family, Darren McGrady traveled the world with Queen Elizabeth II preparing locally sourced cuisines for her and her guests which highlighted each location and event.

Therefore, when the former Royal Chef was invited to Oklahoma State University to create a menu to present at the Distinguished Chef Series in February 2022, he was well-seasoned to take on the task for the School of Hospitality and Tourism Management.

“It’s one of my passions to work with and train the up-and-coming chefs,” McGrady said. “They’re like little sponges absorbing everything.”

McGrady grew up in Nottinghamshire in the United Kingdom and built his portfolio in London at the prestigious Savoy Hotel, eventually becoming the chef de partie - saucier. When a position at Buckingham Palace became available, McGrady seized the opportunity to apply and was extended a position in the royal kitchen.

He spent the next 11 years (1982-93) serving as private chef to Her Royal Highness, Queen Elizabeth II, and the late Prince Philip, Duke of Edinburgh. 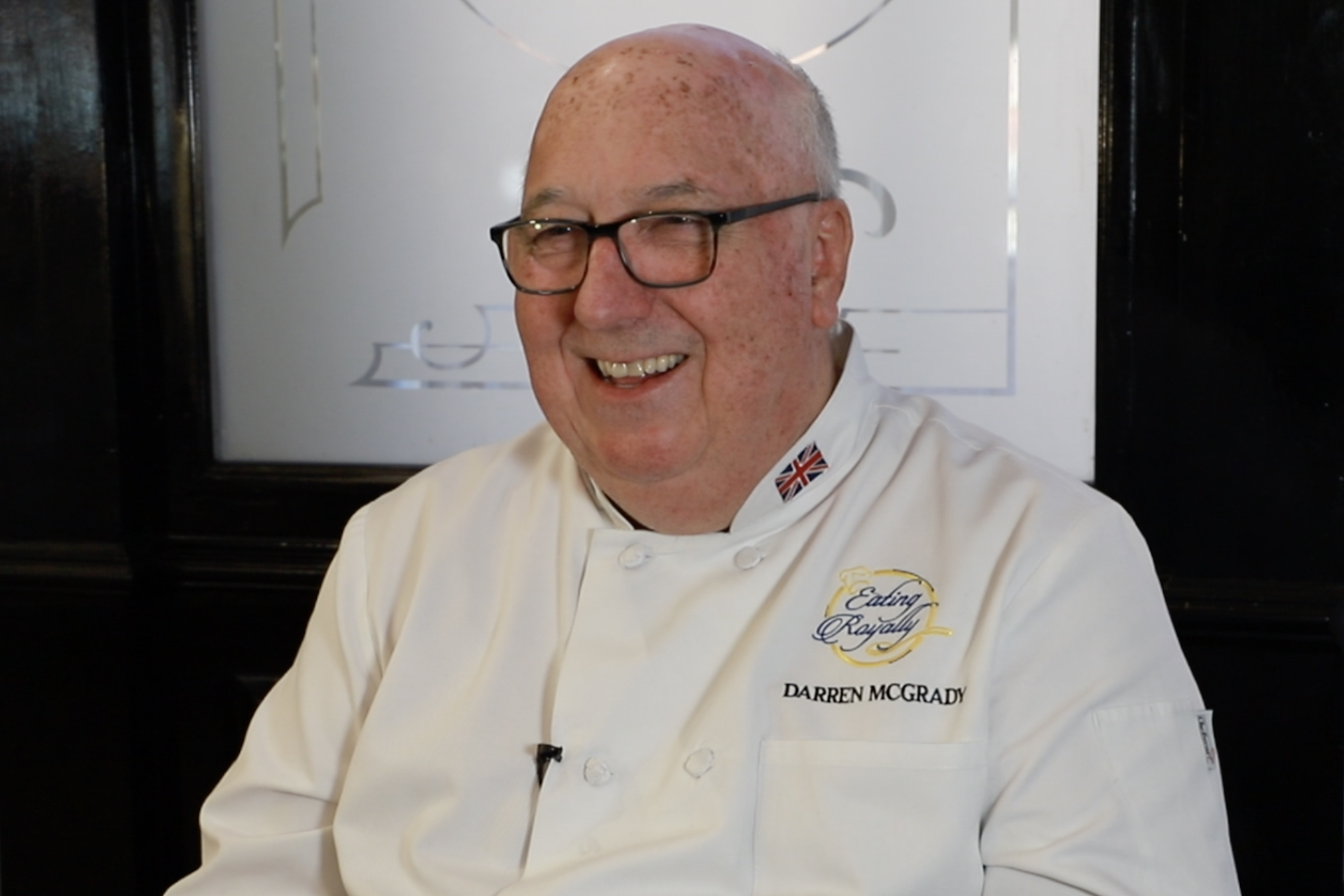 Then, when the Prince and Princess of Wales — Charles and Diana — separated, McGrady moved to Kensington Palace to serve as the Royal Chef to the late Princess Diana and her sons: Prince William, Duke of Cambridge, and Prince Harry, Duke of Sussex.

Over the next four years (1993-97), McGrady not only learned their menu preferences but also developed a special bond and many fond memories with the family. He recalls watching Princess Diana dancing with her sons in the kitchens and holding Prince Harry as an infant while the princess would eat cereal.

He also had the opportunity to sail into Miami, Florida, with the family where they were greeted by the honking horns of the Royal Marines who surrounded them as he prepared dishes for Princess Diana’s guests for the evening — former President Ronald Reagan, former President Gerald Ford and General Norman Schwarzkopf — during the Gulf War.

After McGrady’s time as a Royal Chef, he moved to Dallas and faced a significant culture shock when he essentially had to re-learn the food industry while establishing his catering business.

“I was used to calling Harrods in London and having food just brought over,” McGrady said. “I mean it’s the queen, for goodness sake, and the royal family, so everything that came in was absolutely perfect.”

"To see what you have here on campus, how amazing it is, how big the diversity is here and just going into the kitchens and seeing what there is to offer, I just wish that I could have come here as a young chef starting out and graduated from OSU."

After a short learning curve and adjustment to the U.S., he wrote two cookbooks and became a public speaker. In his cookbooks, Eating Royally: Recipes and Remembrances from a Palace Kitchen and The Royal Chef at Home, he referred back to the things that inspire him in hopes of encouraging people to take a new recipe with fresh ingredients and create something amazing.

McGrady has appeared on the Today Show, the Oprah Winfrey Show, CNN’s Larry King Live and other television shows. He was also recently invited as the first private chef to cook at the distinguished James Beard House in New York City.

With all of his past and present successes, McGrady made for an easy choice for the Distinguished Chef Series.

“This is the first time I’ve really got involved in college,” McGrady said. “To see what you have here on campus, how amazing it is, how big the diversity is here and just going into the kitchens and seeing what there is to offer, I just wish that I could have come here as a young chef starting out and graduated from OSU.”

McGrady’s first experience with OSU was when his daughter, Lexie, recent marketing graduate of Spears Business, started touring college campuses before her high school graduation. There were plenty of choices that were closer to home, McGrady recalls.

“It wasn’t just the college,” McGrady said. “It’s the small town where everybody was friendly, everybody was helpful and it made a huge impact.”

So much so that over the past four years it has influenced his youngest son, Harry, a senior in high school, to attend OSU for his college education as well.

BusinessEngage@SpearsMagazineSchool of Hospitality and Tourism ManagementSpears School of Business
Back To Top
Back To Top
SVG directory not found.
©