“We started out with a package and pretty much a blank slate,” Taylor said. “We put together a team that converged departments, professors and included Mechanical and Aerospace, Civil, Electrical and Computer-engineering undergraduate and graduate students, including five faculty Ph.Ds. Our research and development of ATS provides our students with real world experience and that’s what our center is wrapped around – the commercialization of new product development and contributing to economic development in Oklahoma.”

He said the team helped to develop ATS’ revolutionary electric-powered railway system. It will be pre-installed under select portions of an Ardmore Airpark’s ramp area so that the prototype can replicate an aircraft’s pushback from a gate.

“With a fully installed ATS system, a pilot can land on a runway and move onto the taxiway, where he or she can align the aircraft’s nose wheel into an ATS tow dolly,” Taylor said. “Once the nose wheel is secured, a pilot can turn off the main engines and ATS safely moves the aircraft using its channel system to the appropriate gate. The reverse process is used when pilots are ready to take off.

“Aircraft are simply automatically transported from the gate to the taxiway and then the runway. Pilots then turn on their engines and drive off the pull car, move into position and take off.”

The concept for ATS was first conceived by Malicki, an industrious Polish businessman, and a team of engineers. Taylor said he firmly believes the prototype will work when he and his talented OSU team will begin testing it as early as spring 2020. 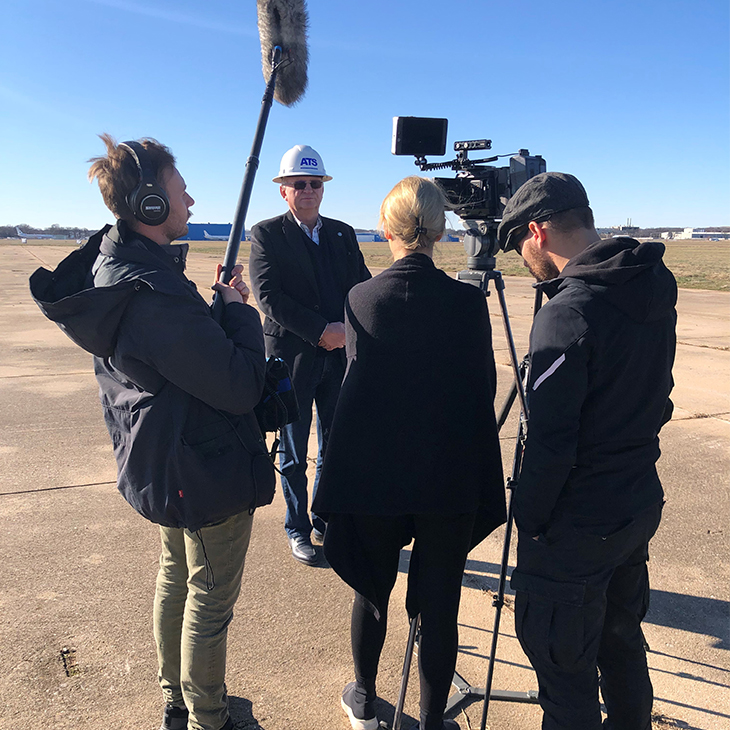 “I suspect there are small bits and pieces we’ll need to adjust, which is common when you introduce a prototype and test the system, but we’re excited,” he said. “Some of the benefits of ATS will be a reduction of fuel emissions, increased engine life and it should improve efficiency. Safety should also increase because of ATS’ positive control of the aircraft run by ground control, so there should be few if any aircraft accidents on the ground.”

Howie, former director of aerospace and defense for the Oklahoma Department of Commerce, said Taylor and the OSU NPDC is doing work that may revolutionize the way airports run in the future.

“We believe ATS will help to provide solutions to the challenges of wasted aircraft fuel because fuel will be saved when the main engines are shut off,” Howie said. “We believe ATS will reduce harmful fuel emissions, decrease noise around airports and extend jet engines life expectancy, all while reducing aircraft collisions. This will create an overall safer and more efficient takeoff and landing system.”

He said ATS has been happy with the OSU NPDC’s research work and in designing and developing the prototype.

“The kind of work they do has really been outstanding, so we’re really thrilled,” Howie said. “It has been a marvelous relationship. People are excited to see the prototype operational.

“We believe there’s a super bright future for this opportunity, not just for OSU, but because we believe it is the next phase of automation for airports worldwide.”

Taylor and some of his NPDC team will be featured, along with other Oklahoma dignitaries, in a yet unnamed documentary about ATS that was recently filmed by an international film crew. The documentary should be available in June 2020 on YouTube and the BBC.