More than 300 Oklahoma State University Ferguson College of Agriculture faculty, staff, students and alumni as well as New Frontiers donors helped celebrate a significant milestone in the construction of the new home for OSU Agriculture.

The OSU Foundation partnered with OSU Agriculture to host a New Frontiers Tailgate & Beam Signing on Sept. 10 before the Cowboy football game against Arizona State University.

“The Tailgate & Beam Signing was another opportunity to bring the OSU Agriculture family together,” said Thomas G. Coon, vice president and dean for OSU Agriculture. “Last year’s tailgate helped raise awareness and created excitement for the campaign, and this year’s event highlighted the meaningful milestone of the beam signing. We appreciate all our alumni, donors, students, friends and family for spending their afternoon with us, celebrating the success of the New Frontiers campaign, seeing the tremendous progress on the construction site and participating in the beam signing.”

The signed beam will be used in construction of the New Frontiers Agricultural Hall, which is scheduled to open in fall 2024.

Earlier this year, university officials announced reaching the $50 million New Frontiers fundraising goal. The New Frontiers campaign is recognized as one of the fastest capital campaigns at OSU, and the first academic capital campaign on campus to reach its goal prior to construction completion and the building opening.

“The Tailgate & Beam Signing allowed us to continue to raise awareness for the New Frontiers campaign and recognize donors who helped us reach our $50 million fundraising goal,” Coon said. “Although we have surpassed our fundraising goal, we will continue to raise support for the project as we have naming opportunities available and features of the building that we know will enhance our efforts. These naming opportunities and additional features will only be possible through additional donor support.” 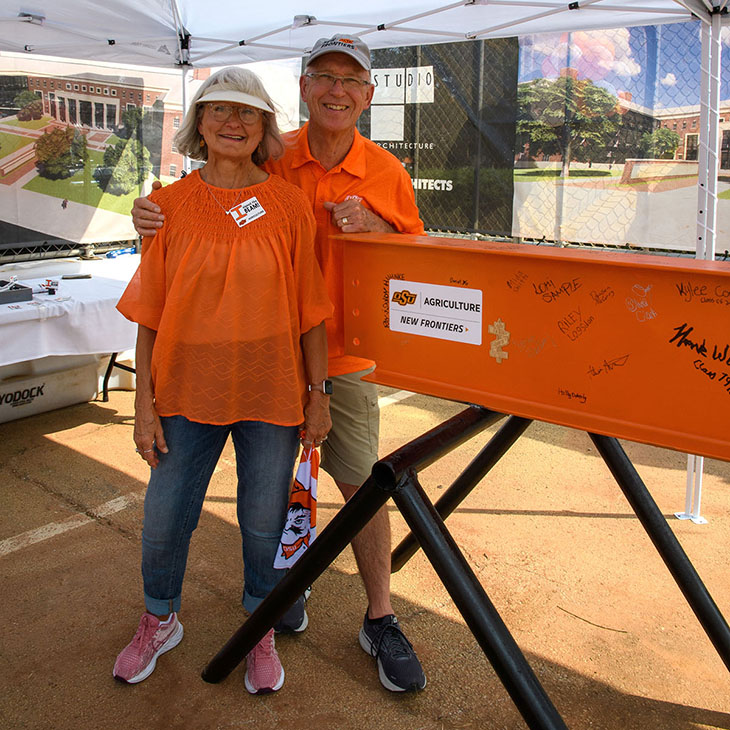 OSU Regents Professor Emeritus Ray Huhnke and his wife, Sandy, attended the tailgate and participated in the beam signing.

In addition to having his name on the beam, Huhnke’s name also will be visible in the building, thanks to an honorary gift to name the Dr. Raymond L. Huhnke Biosystems & Agricultural Engineering Suite located on the second floor of the New Frontiers Agricultural Hall.

“It’s a tremendous honor to have my name be part of New Frontiers,” Huhnke said. “I am also honored to have been, and continue to be, involved in the building’s planning process. Each stage of the construction process is even more inspiring, knowing that we’re one step closer to opening this world-class facility.”

The New Frontiers campaign was launched in January 2020 to build a new state-of-the-art facility for OSU Agriculture. The New Frontiers Agricultural Hall, expected to open in fall 2024, further advances teaching, research and Extension efforts that are critical to the state’s economy, citizens’ safety and quality of life. By advancing OSU Agriculture and its programs, New Frontiers is fostering innovation to help feed the world.