It’s instinctual. You know it when you hear it.

And Lee Redick — “Mr. Orange Power” himself — has helped lead those chants at Oklahoma State University games for more than 20 years.

Redick moved back to the Tulsa area from Georgia in 1997. He and his wife, Kristi, purchased Cowboy football season tickets for that 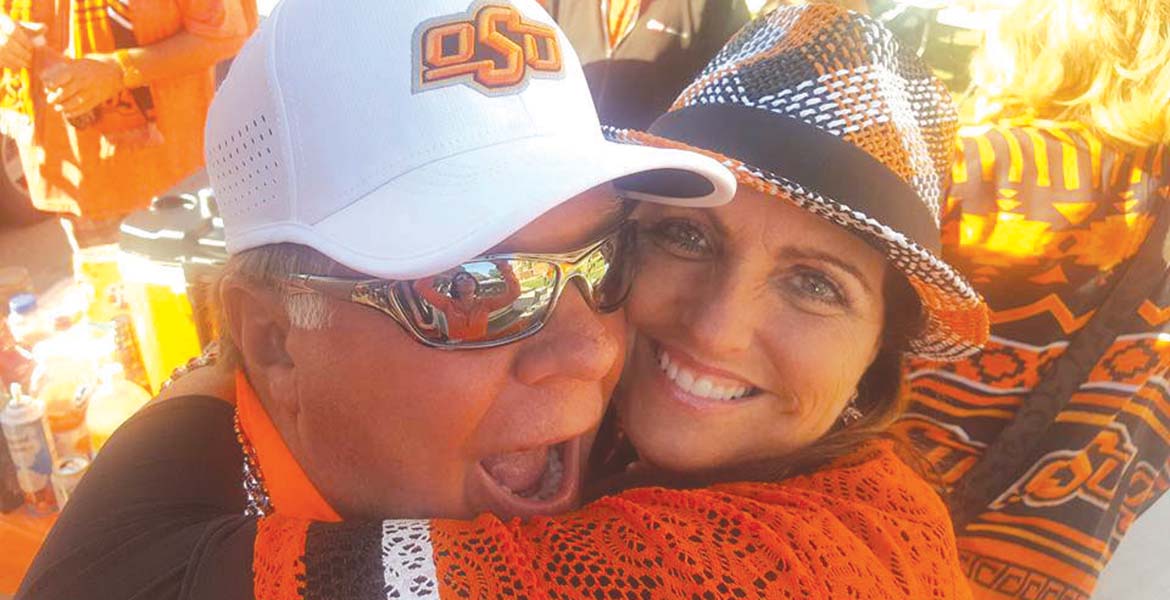 season. At the games, he noticed the crowd had dropped the “Orange Power” chant he loved while he was an OSU student, graduating in 1987.

“Some people thought it was old fashioned and took too long,” Redick said. “If you don’t do it right, it can take a while to get going. I used to just stand there and yell ‘Orange!’ at the top of my lungs.”

It may have taken a couple of more years for the cheer to catch on again and grow to the volume it often reaches today, but that did not discourage Redick, who says the big breakthrough happened at the 1999 Big 12 basketball tournament in Kansas City.

“I had ladies coming up to tell me they were wearing the same orange shirt all four days of the tournament because we were doing the ‘Orange Power’ chant,” Redick said. “It was the only orange shirt they brought with them.

In addition to his voice leading the cheers, Redick also had an iconic look for the games, dressed head to toe in an America’s Brightest Orange jumpsuit. He just happened to find the suit in a closet at the house he and his wife purchased in Tulsa.

“Once I found that, I knew what I was wearing to the games,” Redick said. “I took it to a place to have patches and a big ‘Orange Power’ put on the back of it. I told them that I wanted to look like Elvis meets NASCAR.”

The impact Redick has had on OSU athletics over the past two decades is appreciated by everyone, including fans, athletes and the administration. Larry Reece, senior associate athletic director of development at OSU, has been able to see Redick’s influence on the fan experience while announcing the games in Boone Pickens Stadium. 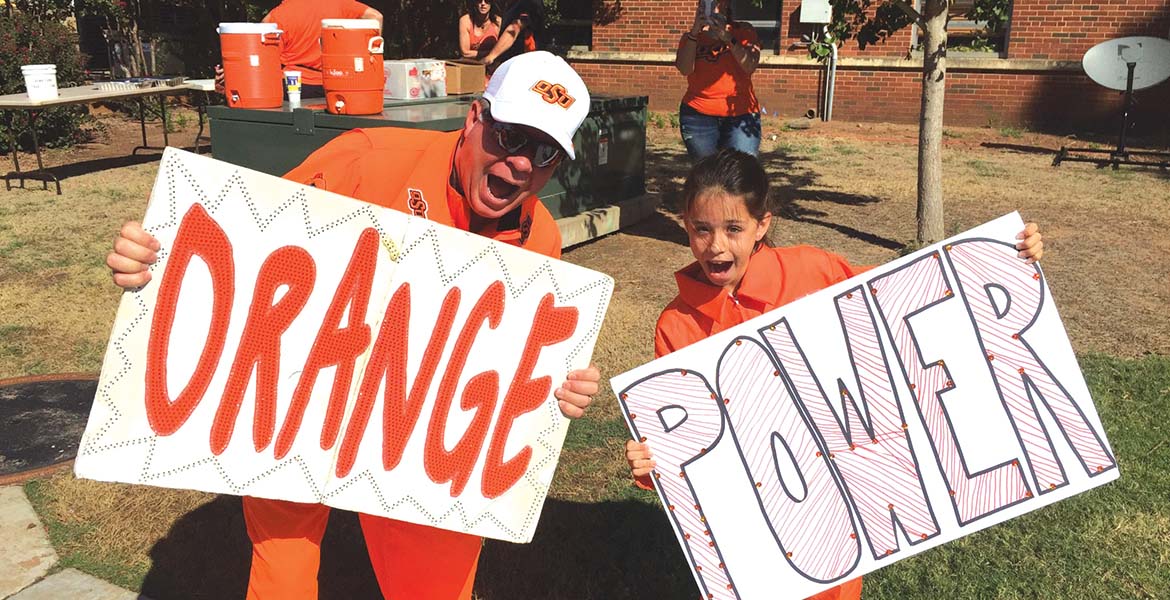 “I think it is amazing that one fan took it upon himself to lead the crowd in the Orange Power cheer,” Reece said. “When I say ‘Good for a Cowboy first down and 10,’ I look over to see Mr. Orange Power leading the fans in the chant. He is the epitome of what it means to be an OSU Cowboy.”

The love from fans means a lot to Redick, and he estimates he has taken close to 30,000 pictures with them as Mr. Orange Power.

“None of my friends really wanted to walk with me to the games because I would stop to take pictures with people,” Redick joked. “Moms would stop and ask if I would take a picture with their sons who are 17 or 18, and right before they snap the photo, they would let me know I had taken a picture with him when he was 4 years old. Moments like that make me tear up or cry.”

As much as he loves being Mr. Orange Power, it wasn’t easy for Redick to decide to retire. His last game leading the chant was the Cowboy football game against Texas Tech in Stillwater on Nov. 28, 2020.

“I think it is amazing that one fan took it upon himself to lead the crowd in the Orange Power cheer. When I say ‘Good for a Cowboy first down and 10,’ I look over to see Mr. Orange Power leading the fans in the chant. He is the epitome of what it means to be an OSU Cowboy.”

- Larry Reece, Voice of the Cowboys

“The very last one we did was when we got the safety in the fourth quarter,” Redick said. “We were doing ‘Orange Power’ on that play, and it was loud. I took my hat off and said that’s it. I’m done. I wanted to go out right there.”

Redick hopes the “Orange Power” cheer will continue in the future. While Mr. Orange Power may not be there to lead the crowd, Redick would love for the student section to take over his role.

“They are set up right there in the end zone,” Redick said. “That seems like the perfect place to continue the tradition.”

Story By: Will Carr | STATE Magazine