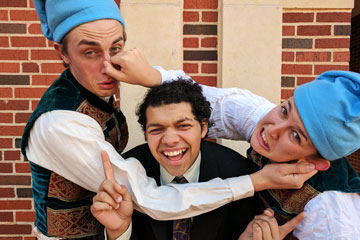 Ever wanted to know what it’s like to live to be 100 and maybe get some tips that could help you get there? It’s all available online at the Oklahoma State University Library, thanks to the Oklahoma Oral History Research Program (OOHRP), which was recently recognized for its “Oklahoma 100 Year Life” oral history project by the national Oral History Association. Whether you’re one of the millions who’ve seen him play the ukulele on YouTube or you simply appreciate his world-renowned talent, Jake Shimabukuro is sure to captivate you when...

The works of composer Igor Karaca, who has written a diverse range of music from symphonies and motion picture soundtracks to jazz and pop-rock pieces, will be featured at the... When the Tulsa YWCA celebrates the 2018 Women of the Year -- Pinnacle Awards, Carola Muñoz de Cote will be among 10 women honored. As the program manager for the College of Human Sciences’ ¡Juntos Se Puede! (Together We Can!), Muñoz de Cote works with Tulsa area families and students to help them achieve high school graduation while promoting higher education as an option. Noted as a champion for equitable education in the Latina community, Muñoz de Cote personifies the mission of YWCA - to eliminate racism and empower women. 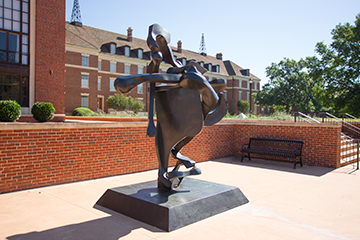 The U.S. Senate has confirmed the nomination of Lance Allen Robertson for U.S. Assistant Secretary and Administrator for the Administration on Community Living, U.S. Department of Health and Human Services. President Donald J. Trump nominated the Oklahoma State University alumnus earlier this year. Robertson has been Oklahoma Department of Human Services’ Director of Aging Services for the past decade, overseeing a range of programs that included the Older Americans Act and the State’s Home & Community Based Services Medicaid Waiver (ADvantage). He led a statewide team of 225 staff members.

The OSU Department of Theatre will serve up terror, drama, disarming comedy, Shakespeare, and a musical suitable for the whole family, during its upcoming Main Stage season, so...

NEA grant to promote the works of late OSU artist

The National Endowment for the Arts (NEA) has awarded a $20,000 grant to Oklahoma State University art historian, Dr. Louise Siddons, to support a traveling retrospective...

OSU art takes Stillwater youth around the world in 10 days

A new summer youth art program will introduce students to arts, culture, history, and cuisine of the world in a hands-on, two-week tour from the Multi Arts Building in downtown...

The United States Coast Guard Band will present a free concert on Tuesday, July 25, at 7:30 p.m. in the Seretean Center for the Performing Arts.

Making the move from Stillwater to a big city can be daunting, but one Oklahoma State University student decided to make the leap this semester.

Oklahoma high school students have an opportunity to explore the wide, creative world of art during the third annual Oklahoma State University Summer Art Academy, presented by the...

Oklahoma State University’s Studio Methods class is unveiling its latest project, a mural dubbed “Locla-homa Grown,” on Wednesday, May 3, from 3:30 p.m. to 5 p.m. at Food Pyramid...

Masterpiece Moments: Artist at the table to celebrate community commitment to the arts

Masterpiece Moments: Artist at the Table will combine artists’ talents and the community’s commitment to the arts in a fun-filled night on Saturday, May 6, at 6 pm.

SNL’s Kenan Thompson and Michael Che to speak at OSU

Saturday Night Live cast members Kenan Thompson and Michael Che will offer some comedy and answer questions from the audience at Gallagher-Iba Arena on Wednesday, April 19, at 7... The College of Human Sciences at Oklahoma State University inducted Marilynn Thoma into its Hall of Fame and named Carl Thoma an Honorary Alumnus of the college. The awards were presented during the Wine Forum of Oklahoma, a biennial event the Thomas founded.

Tickets are now on sale for OSU Department of Theatre’s fourth and final Main Stage production of the academic year, James Valcq and Fred Alley’s “The Spitfire Grill.” The musical...

For the fifth time in four years, Oklahoma State University has earned a first place award at the National Trumpet Competition, held recently in Denver, Colorado. The OSU Museum of Art is pleased to introduce The Art of Asian Languages on view from April 4 – June 10, 2017. College of Human Sciences faculty member Emily Roberts will receive one of five DaVinci Fellowships from the Oklahoma DaVinci Institute on Friday, March 31.